Main page
About us
Historic site in physics

The European Physical Society (EPS) constituted the main building of the Institute for Nuclear Research, Hungarian Academy of Sciences an outstanding Historic Site in physics research. Alexander Szalay, the founding director of the institute and his doctorandus Julius Csikai carried out the neutrino experiments in this building in autumn of 1956. These experiments confirmed the existence of the neutrino and thus laid a brick of the foundation of modern physics.

As an acknowledgement of the international importance of these results, the European Physical Society inaugurated a plaque in the memory of the experiments on 25 October 2013. The participants at the ceremony were (among others): representatives of the Hungarian Academy of Sciences, Debrecen city, University of Debrecen and Roland Eötvös Physical Society. After the ceremony, scientific lectures were given about the neutrino experiment carried out at MTA Atomki and about important problems of the recent neutrino research.

In 1930, W.E. Pauli postulated the existence of the neutrino to explain the continuous energy distribution of electrons emitted in beta decay. Only with the emission of a third particle could momentum and energy be conserved.

By 1934, E. Fermi had developed a theory of beta decay including the neutrino presumed to be massless and chargeless. The nature of the (weak) interaction leading to beta decay was unknown this time.

In 1956, direct evidence of the existence of the neutrino was published by F. Reines and C.L. Cowan. In their experiment antineutrinos created in a nuclear reactor by beta decay reacted with protons producing neutrons and positrons; the coincidence of the neutron capture and the positron annihilation proved the antineutrino interaction.

In 1956, at Atomki (Debrecen, Hungary) J. Csikai and A. Szalay having modest possibilities managed to prove the existence of the neutrino by means of an expansion type Wilson chamber. The photographic evidence enables not only the observation of a single atomic event but the measurement of the angular distribution of the emitted (anti)neutrino and thus the investigation of the nature of the interaction.

Decay of 6He was exceptionally advantageous for observation of the recoil effect of neutrinos i.e. the missing impulse carried away by a neutrino:

Taking into account the short half life of 6He (801 ms), a series of technical problems had to be solved related to its production, its introduction into the chamber and the timing of the production, expansion and photoshot.

By measuring the curvature of the trajectories of the beta particle and the recoiled nucleus and the angular correlations between electrons and (anti)neutrinos, the balance of energy and impulse and the type of the interaction could be determined.

The first good photos were taken at the end of 1956 and the results were published in 1957. The photos can be found in numerous basic physics books. The expansion type Wilson chamber used in the experiment is exhibited in the main building of Atomki where the experiments were done.

Summary of the experiment:

The poster about the Wilson type expansion cloud chamber at the exhibition:

Inauguration of the plaque and the lectures after the ceremony 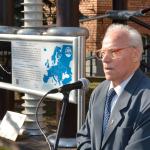 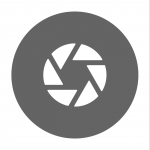